The Cape gooseberry(Physalis) is one of my favorite fruits..I love the delicacy of the leaves , transparent, like the wings of a butterfly. The berry itself is quite insignificant in taste, rather tart. Back in SA, I had a friend who grew them on her farm and we would pick armsful, stuff ourselves along the way and return home to make jams and chutneys and whatever else we could think of. For decoration, they are wonderful and just kissed with a touch of gold leaf, they can turn any dessert into a visual delight.I first sketched sort of a thumbnail in my sketchbook(the second drawing); just playing around with composition and color and values etc, and then did a more complete one, which of course, completely turned out overworked and stiff with no visual interest. This happens far more than I would like…too often my planning looks so much better than my final attempt, when”Thinking” comes into play then, it seems

Posted by Africantapestry at 3:58 PM

Jana Bouc said…
Great stuff on your blog. You have a wonderful and lively sense of composition. Your sketches are great–so expressive and your watercolors are just delightful. I’m so glad you commented on my blog leading me to your site. I’ll be back!
February 13, 2007 4:40 PM
Renate said…
Gorgeous paintings! Though I really like both versions, I prefer the more sketchy one. (aka the one you did first).
Oh, and have a great time!
February 13, 2007 5:03 PM
ksklein said…
i couldn´t decide between the two. i like them both. the physalis is also called Lampionfrucht here in germany. that means lampion fruit. 🙂
February 13, 2007 8:04 PM
Casey said…
I like them both, Ronell, but I think I prefer the quick sketch as well. It’s hard to reproduce that spontaneity in a second try!
February 13, 2007 9:05 PM
aPugsLife said…
Very nice! Have u ever seen this photo of a Physalis? 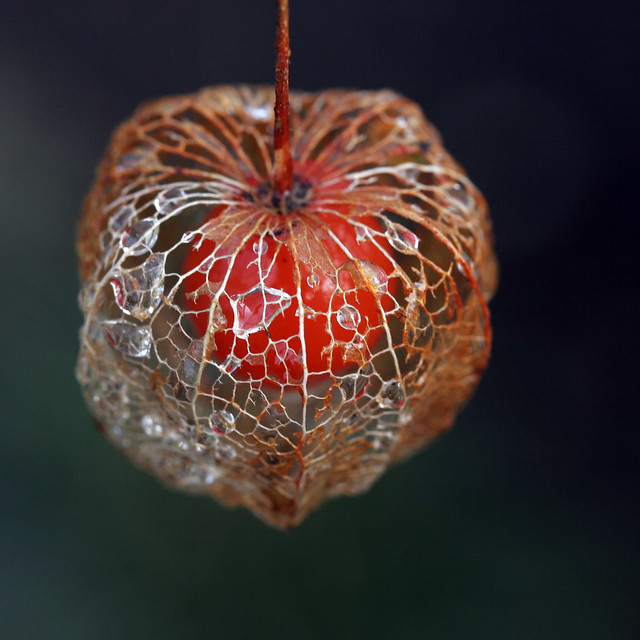 It was very popular on flickr, and one of my fav. photos. 🙂
February 14, 2007 12:03 PM
gabi campanario said…
you’re right, it’s often hard to replicate the spontaneity of a sketch when you set yourself to do a ‘final’. i’m trying to tell myself everything i draw is a ‘final’ to avoid that. but it’s still hard. great stuff in your blog, have a good trip to SA

We are back home in Provence after our holidays in South Africa. It was fantastic and we were so graciously and warmly welcomed by our friends and family! Is a bit wintry here at home after the heat and green and lush of SA, but pretty soon everything will pop into colour and Provence will emerge from its winter rest. In the meantime, the sun is shining, the skies are blue and I am planning for the garden!
Kitchen corner. The kitchen is the place where it all happens.
A quiet Saturday morning.
Dark eyes. I had huge difficulties with this painting. Finally I went ahead and just siftened all my brushstrokes into one flat plane, not much depth and definition. But it goes to show painting sometimes goes all wrong.